Blog
OpenEnergyMonitor
Following on from last blog post on heat pump monitoring I will try in this post to give a bit of context on heat pumps. Heat pumps are interesting because they provide a way to make efficient use of renewable electricity for heating. They are used in many zero carbon energy scenario's including the ZeroCarbonBritain scenario from the Centre for Alternative Technology which is one of the most comprehensive UK based 100% renewable energy scenarios created.

This sankey diagram from the ZeroCarbonBritain report gives an overview of the energy flows in their scenario, with heat pumps providing the bulk of the heating and hot water demand: Read on →

For a number of years now I have been working with John Cantor on monitoring heat pumps. John is one of the UK's foremost experts on heat pumps having worked in the field since the early 1980's, he has written a book on heat pumps and is an advisor and consultant on the technology.

Earlier this year we worked on reading heat metering data from a Kamstrup heat meter in order to obtain accurate heat output measurement in addition to system flow temperatures and electrical power input. After spending quite a bit of time adapting existing emontx hardware and often emontx v2 hardware to integrate the additional circuitry required we decided it might be better to try and design a dedicated heat pump monitoring board that would have all the functionality we needed on a single board.

This board is currently going through initial testing.
Read on →

Today marks an exciting milestone for Emoncms and the OpenEnergyMonitor project. We are proud to launch an Emoncms android mobile app. Read on →
Using the emonPi in it's current default configuration works great to post data to Emoncms for logging and visualisation. However there may be times when you want some more flexibility and or ability to interface with other hardware or services
In my last few blog posts I have been taking a look at making the emonPi the heart of a smart energy optimised home and how live energy monitoring data from the emonPi can easily be used to inform other services:
1. Read on →
Yesterday evening Trystan and I attend a local meetup in Bangor, North Wales hosted by NorthWalesTech It was a good event with some interesting talks. Here are the slides from the 5min lightning talks we gave:

My slides give a brief overview of the OpenEnergyMontor project before diving in to MQTT and node-RED with a live demo controlling LightWave RF plugs switching Christmas lights over the web using MQTT and nodeRED:

Trystan's lightning talk was focused on a heatpump which he has recently installed with John Cantor to heat his home. Trystan gave an overview of heatpump technology, his monitoring setup and the preliminary performance results:

Using a Raspberry Pi as an emonPi / emonBase web-connected base station for energy monitoring has many advantages (maintainability, remote access, debugging, updated etc.) but it does seem rather wasteful to have a 900Mhz 1GB RAM machine being used to post a couple of integers to a web-server! The always-on nature of a web-connected base station and plenty of spare processing power makes it ideal to use the emonPi for more than just energy monitoring; home automation and heating control optimisation are obvious candidates.

Many home automation products such as RF plugs, relays and heating remotes use a simple OOK (On-Off-Keying) wireless protocol. UK company LightWaveRF produce a variety of RF plugs and relays which can be controlled via OOK RF. The protocol is also compatible with some cheaper OOK learning receiver relays.  While maybe not strictly open-source the protocol and been reverse engineered allowing plugs to be easily controlled from Arduino / Raspberry Pi. There is an active LightWaveRF online community. Using off-the shelf hardware like this is a 'safe' way to control lights, heaters and appliances  around a home without getting our hands dirty dealing with with high voltages. These plugs and relays can be used to control anything from lights to immersion heaters, most LightWaveRF plugs/relays will switch up to 13A / 3kW.

Note: OOK protocol by it's simplistic nature is not particularly secure, I would not recommend controlling anything you don't mind getting accidently switched.
An OOK transmitter can easily be added to the emonPi.  We have started stocking OOK transmitter modules in the OpenEnergyMonitor store as well as adding an option to have OOK module factory installed on new emonPi's. 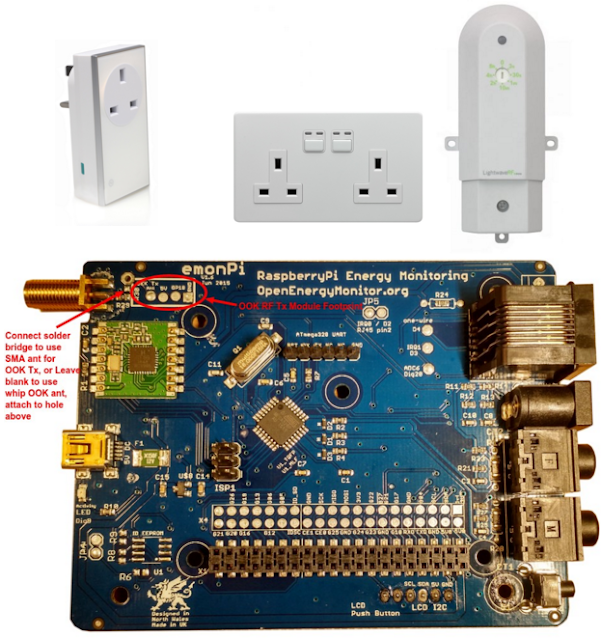 We have been working with Lawrie Griffiths from Geek Grandad blog to develop a LightWaveRF MQTT service to run on a Raspberry Pi to allow LightWaveRF plugs to be controlled via MQTT.

Once running a plug can be controlled by publishing to the 'lwrf' MQTT topic:

See emonPi technical Wiki for how to install & setup.

Existing LightWaveRF remotes can be emulated allowing plugs to be controlled from either emonPi MQTT or via the remote.

Now our plugs can be controlled via MQTT there are a many of options open as to how to control either via interface openHAB (blog post coming soon..), nodeRED, android Tasker etc.

I have been using nodeRED with input from android OwnTracks running on my phone to detect when I'm home and turn on a couple of lights:

Demo:
Using NodeRED and OwnTracks to turn on LightWave RF sockets when I arrive home:

Using android Tasker with  AutoVoice and MQTT plugins to control LightWaveRF sockets:
Next Steps
Now we can control appliances remotely via MQTT the next logical step is to add a mobile user interface. In my next blog post I plan to explore setting up openHab to control appliances. Here's a early preview:
We plan to include out-of-the-box support for OOK LightWave RF, nodeRED and openHab pre-configured on our next emonPi pre-built SD card. Due for release in December 2015.


Following on from my blog post creating an ambient indicator to indicate wind turbine renewable electricity generation we have extended the Emoncms UK electric grid statistic aggregation to calculate and record the UK electric grid carbon intensity i.e. the amount of carbon emitted per kWh (CO2/kWh). As before we have created a dashboard open API for easy access to this data.

Other feeds are also available including grid fuel mix and current energy demand, just place 'id' in the API with the feed ID's below:
If you use the API in your project please drop us a line and give Emoncms some credit :-)
The data is captured from the UK Balancing BM Reports XML. Our figure for grid intensity matched the figure generated by http://www.gridcarbon.uk/.


I have recently been experimented using Node-RED for a number of tasks. Thanks to the work of others a Node-RED flow node already existed for Emoncms making it very easy to post data to Emoncms. For my Ambient Wind Energy Indicator I had the need to extract real-time feed data from Emoncms feeds using the Emoncms API. I have now contributed this functionality to the official Node-RED Emoncms node. Using the updated Emoncms node it's now super easy to post data to extract latest real-time feed values from any Emoncms server including Emoncms.org.

Get the latest version from: http://flows.nodered.org/node/node-red-node-emoncms. If you're interested in viewing and improving the functionality the open-source code behind the node is up on the Node-RED flows GitHub

Here's a few slides giving an overview of the OpenEnergyMonitor project as it stands currently in November 2015. It features some of the work we have been doing looking at the embodied energy involved in producing and shipping some of our products as well as latest developments on Emoncms application dashboards.

Notes to accompany the slides can be found here.


The emonPi / emonTx standard install is designed to monitor whole house power consumption. An excellent learning exercise that we recommend everyone undertake soon after installing a whole house energy monitor is to turn off every appliance in the house then slowly turn on each appliance keeping a close eye on the real-time Emoncms dashboard. Walking around the house using a handheld mobile device to display the Emoncms dashboard works great for this. For fastest response we recommend connecting to the local Emoncms running locally on the emonBase / emonPi which will update ever 5s (emonPi default) or 10s (emonTx default).

After this exercise you should have a good idea what the trace signature of each of your appliances looks like on the graph. The easiest to identify are the large power consumers e.g kettle 3kW spike and shower 8kW spike. However with a bit of observation it's possible to identify subtler power signatures. Here's an excellent example by posted by @Zapaman showing a Solar PV dashboard annotated to identify his fridge / freezer and central heating pump running over night. It's great to see the solar PV kick in providing more then the demand when the sun hits the panels in the morning :-)